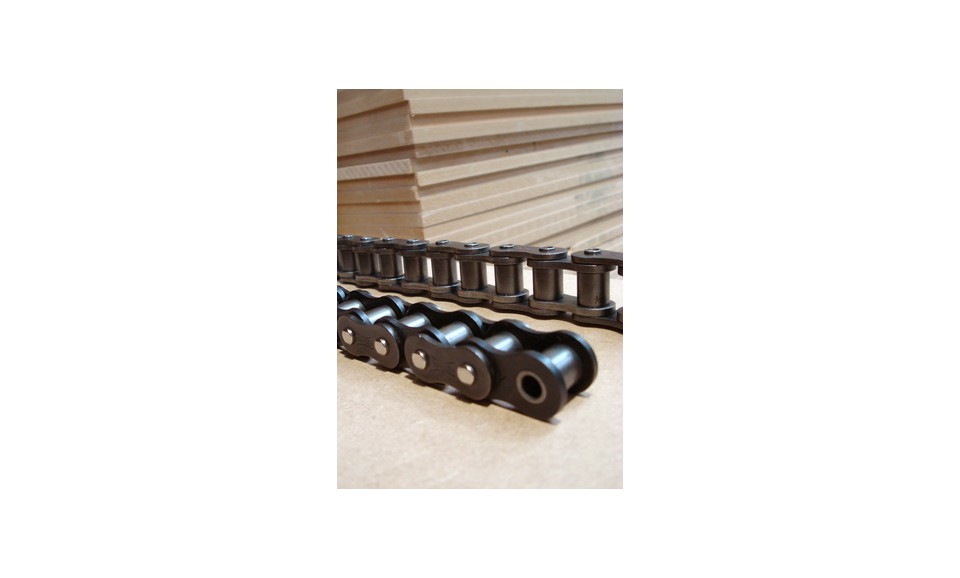 A three-year field test of roller chain at an MDF board production plant has resulted in operating costs being reduced by tens of thousands of pounds per year. One of the largest producers of MDF and particleboard in Europe has compared the cost of ownership for several popular brands of roller chain over a three year period at one the company's main production plants. The samples varied from the cheapest available through to the highest quality lube-free roller chains; each was compared in a simple wear test. The aim of the practical test was to establish figures for outright longevity in an arduous application on the 'forming line', an area of the board production process that had the highest turnover of chain.
The maintenance team was replacing an incredible 90,000 ft of roller chain every year at the plant before the Site Engineering Manager decided to benchmark alternative brands. Longevity could then be compared against purchase cost, maintenance costs and any downtime factored in to give the true cost of running the different chains. The intention was then to standardise on the chain types and brands that would cost the least to operate. The results of this test make for surprising reading, and go to show that in this particular application, quality resoundingly triumphed over quantity.

In order to include a broad selection of popular chains, the team turned to a trusted local power transmission supplier to provide samples. Some of the best selling brands were put forward; including those that the distributor knew would perform well in a quality test, all with the aim of ensuring the customer found a solution to the problem.

The plant process produces 300,000 meters cubed of board each year from just two main production lines, running virtually 24/7. The board making process is tough on chain, and the operators realised that even though the purchase price of the chain they had used previously was low, the cost of maintenance time required for replacement and the downtime caused by failures was outweighing the benefits of the low purchase cost. The cost implications of a broken chain run into many thousands of pounds per hour and this was happening far too often.

The test chains were therefore fitted to the forming section of the MDF production line, a part of the plant that originally had the highest turnover of chain. The chain operates in close proximity to wood fibres that can cause chain wear as they come into contact with lubricant and are drawn in between the chain components. The chain is also under tension and has to cope with heat and repeated high loads as the boards are pressed.

The test was simple in that the chains were fitted to five identical points and then replaced each time they failed and the scores marked down.

The test results for the number of weeks the different chains lasted are below.

Woodindustry graphicBefore the test was fully over the customer had decided to standardise on Tsubaki chain, with BS/DIN Standard chain used in the less arduous applications and Lambda Lubefree on the really tough sections. Working with the distributor the engineers were able to monitor progress and ensure the results were known within the plant, particularly the news that Lambda chain was still going after two years in one area.

Once the test showed there were substantial savings to be made however, the decision to change brands wasn't a forgone conclusion; the production and maintenance department still had to make a case to the financial side of the business, one that argued that buying a product that was considerably more expensive that the original offered the greatest savings.

Although just the chain longevity is shown in the chart, the value calculation was made on the full overall equipment effectiveness (OEE) cost. The purchase price of Tsubaki chain, particularly the lube-free Lambda variant was spread over the time that it remained in operation; when compared to the reduction in downtime and replacements, the cheaper chain showed it was actually costing the business tens of thousands of pounds more. The combination of maintenance costs and downtime actually amplified the OEE results, making the Tsubaki chain a far more cost effective option to the business.

The case was put to the Group Purchasing Manager, running cost was based on unit cost per foot added to a conservative labour cost for replacement. It takes the maintenance team 3 hours to change the chain and that is working quickly because they are used to doing it. An estimate was made on overall plant downtime for the year attributable to chain replacement and failure, this figure was so large that the final OEE figures will not be released externally, it was however decisive in persuading the Group Purchasing Manager to agree on standardisation on Tsubaki chain product across the plant.

Since standardising, the company estimates that it is spending around £40k less per year on purchasing cost for chain alone, the savings in reduced down time and so overall contribution to the bottom line is well into six figures. Proof that quality can be a better economy than quantity, in the respect of roller chain.