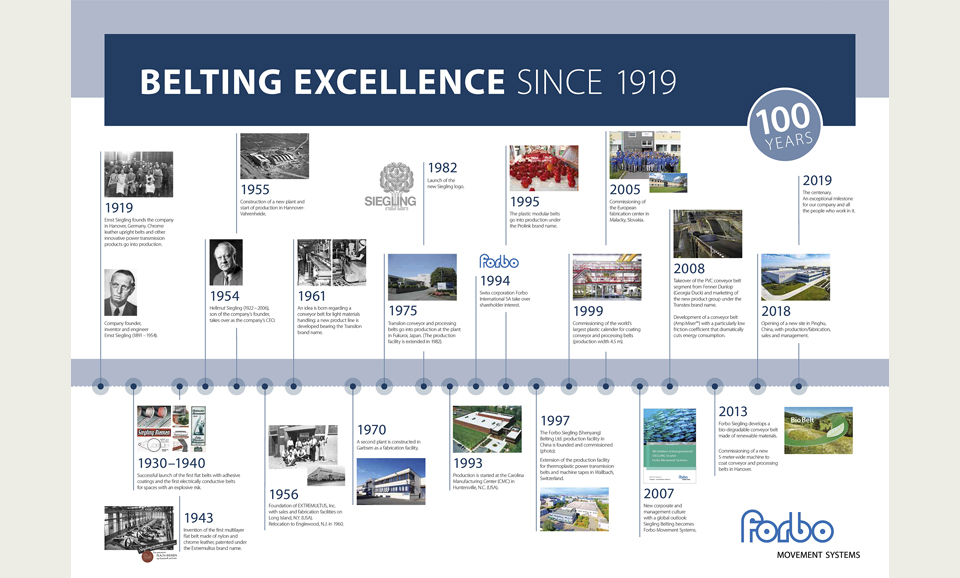 Only we have polymeric belts with history of 100 years

Beltimport appreciates the long-term cooperation with  Forbo company (Germany) and congratulates on the 100th anniversary of constant innovations. We are proud to be an exclusive distributor and service center in Ukraine of the largest manufacturer of polymeric belts, flat and timing belts in the world.

We think, our customers will be also interested to learn about innovation path of Forbo:

1930 - Successful launch of the first flat belts with adhesive coatings and the first electrically conductive belts for spaces with an explosive risk.

1943 - Invention of the first multilayer flat belt made of nylon and chrome leather, patented under the Extremultus brand name.

1955 - Construction of a new plant and start of production in Hannover-Vahrenheide.

1956 - Foundation of Extremultus, Inc. with sales and fabrication facilities on Long Island, N.Y. (USA). Relocation to Englewood, N.J. in 1960.

1961 - An idea is born regarding a conveyor belt for light materials handling: a new product line is developed bearing the Transilon brand name.

1970 - A second plant is constructed in Garbsen as a fabrication facility.

1975 - Transilon conveyor and processing belts go into production at the plant in Fukuroi, Japan. (The production facility is extended in 1982).

1993 - Production is started at the Carolina Manufacturing Center (CMC) in Huntersville, N.C. (USA).

1995 - The plastic modular belts go into production under the Prolink brand name.

2005 - Commissioning of the European fabrication center in Malacky, Slovakia.

2008 - Takeover of the PVC conveyor belt segment from Fenner Dunlop (Georgia Duck) and marketing of the new product group under the Transtex brand name.
Development of a conveyor belt (Amp Miser™) with a particularly low friction coefficient that dramatically cuts energy consumption.

2013 - Forbo Siegling develops a bio-degradable conveyor belt made of renewable materials.
Commissioning of a new 5-meter-wide machine to coat conveyor and processing belts in Hanover.

2018 - Opening of a new site in Pinghu, China, with production/fabrication, sales and management.

2019 - connect with the history and innovations together with Beltimport!