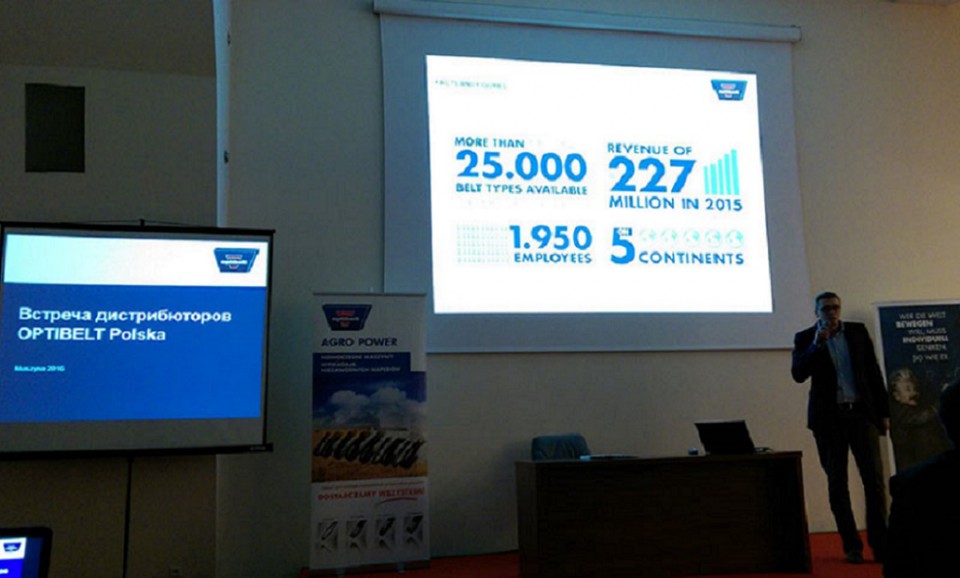 The annual meeting of Optibelt Eastern European distributors took place in Polish mountain resort of Muszyna on 4-6th March 2016. Beltimport, being the largest industrial distributor of Optibelt in Ukraine, also participated in this meeting. We have shared success stories and discussed problems.

Plans for next year were arranged as well as novelties in a range were presented. It should be noted that the application of Optibelt belts have long been proven to be effective through the whole world. And every year this brand is only increasing its position. It would seem that only recently a new modern factory in Romania has been built, which, by the way, produces mainly V-belts. But not a long time had passed, since it was realized that the powers from eight Optibelt plants in the world are not enough – they all work with a full load. Therefore, Optibelt shareholders took the decision to expand the Romanian plant in Tauthi Magherau. As a result, in recordingly short time they built 10,000 square meters of space additionally: manufacture department (3,500 sq.m.), office space (1200 sq.m.) and warehouse (5400 sq.m.). Today test output is already launched, and plans for the year 2016 in Romania is to produce a minimum of 2.5 million belts and for 2017 – to bring the production up to 4 million, and ultimately double the capacity. Optibelt notes the great potential of the Eastern European market and believes that success in Ukraine will continue to grow.

As always, those meeting days were spent in a highly friendly company of our old friends, and we are sincerely grateful to Optibelt Polish office for the excellent organization and great emotions.