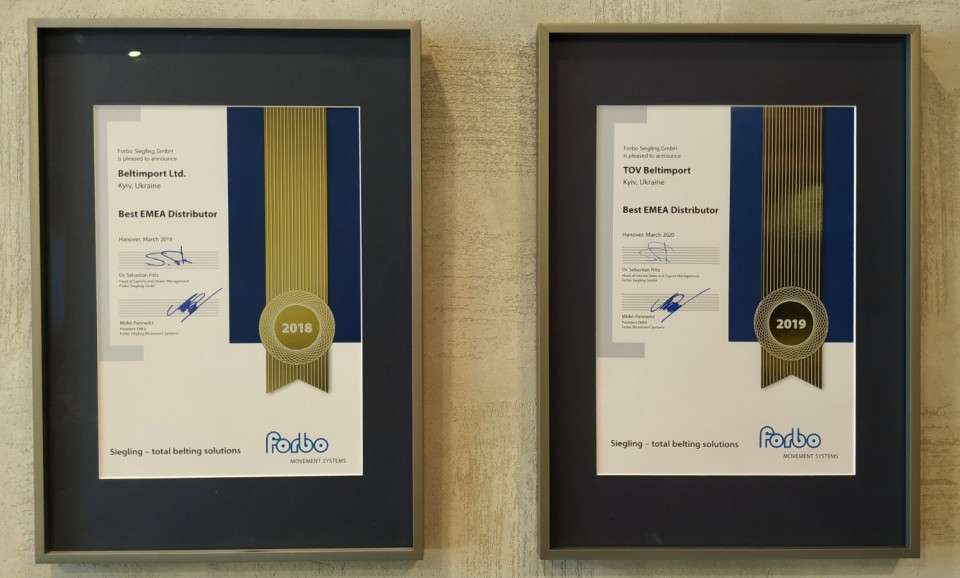 In the times of high turbulence, it is extremely nice to obtain recognition from your partners. It always adds new strength and inspiration to move even faster and more confidently.

We are proud to receive a certificate from Forbo Movement System, stating that for the second consecutive year, Beltimport has become the best Forbo’s distributor in the EMEA region (Europe, Middle East and Africa).This good piece of news was recently provided to us by Sebastian Fritz, Head of Internal Sales and Export Management, who expressed his gratitude for the cooperation and the results obtained, especially in the recent years.

Forbo Movement Systems is a manufacturer of conveyor and processing belts, modular plastic belts, flat drive and PU timing belts. Production experience of 100 years, modern technologies and high-quality products have led Forbo to become one of the global leaders in its field.

The success of Beltimport is not casual. Actually, quite the contrary - it is the result of hard and patient work over many years. We have been cooperating with Siegling (the former name of Forbo Movement Systems until 2001) since 1998. Over this time, we have made significant efforts to become leaders in our field. In particular, significant investments have been made in production facilities, a lot of time and material resources have been invested in training and "equipping" of engineering and maintenance departments. Over the years of its activity, Beltimport has assisted to solve many complicated issues for customers and partners, thus gaining respect and trust.

We always strive for improvement, constant development and do not plan to stop there!